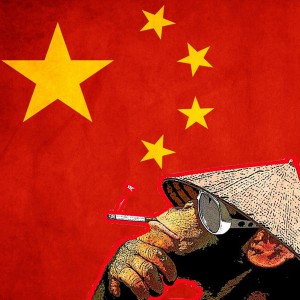 新年快乐, my honkies! That’s right, the Happy New ChinaYear is upon us, and this time around, for the first time in the history of the SFJ podcast, it’s the Happy New Chinese Year of the Chinese Chinamonkey! In keeping with this extremely auspicious occasion, we bring you this very special episode of the Sweet Feathery Jesus Podcast, which is focused on all things Chinesey and monkeyish.

In retaliation for the travesty that was Tiptoes, Booze and Beardo make Chuck Turtleman and his Internet Lady watch a beloved TV Japanese Chinashow from their youth, called “Monkey!”, This show never aired in the US, and so Chuck was totally unaware of its very existence. Until now! It features Japanese Chinapeople depicting Chinese Chinapeople, overdubbed by British people doing a hilariously racist Chinese China-accent. Don’t worry, there’s also plenty of gleeful violence and attempted rape (it is a kids’ show, after all!).

Professor Chuck Turtleman takes up the Chinese monkey copter, and brings us a veritable Chinese buffet of stories from the Chinese Chinaregions. We also feature one of the best Idiots of Facebook segments ever, when some of Friendzone Frank’s “Bellas” turn on him in a cruel twist of fate that he totally did not bring upon himself by his own repeatedly stupid actions.

All this, more casual racism than you can poke a chopstick at, and the very special return of a fan-favourite former SFJ segment after a two-year hiatus, on this very special episode of SFJ!

So drill some ear holes in your lampshade-shaped monkey-sized Chinahat, and stick us right in there, nice and deep!

(Special thanks to Gravy!)